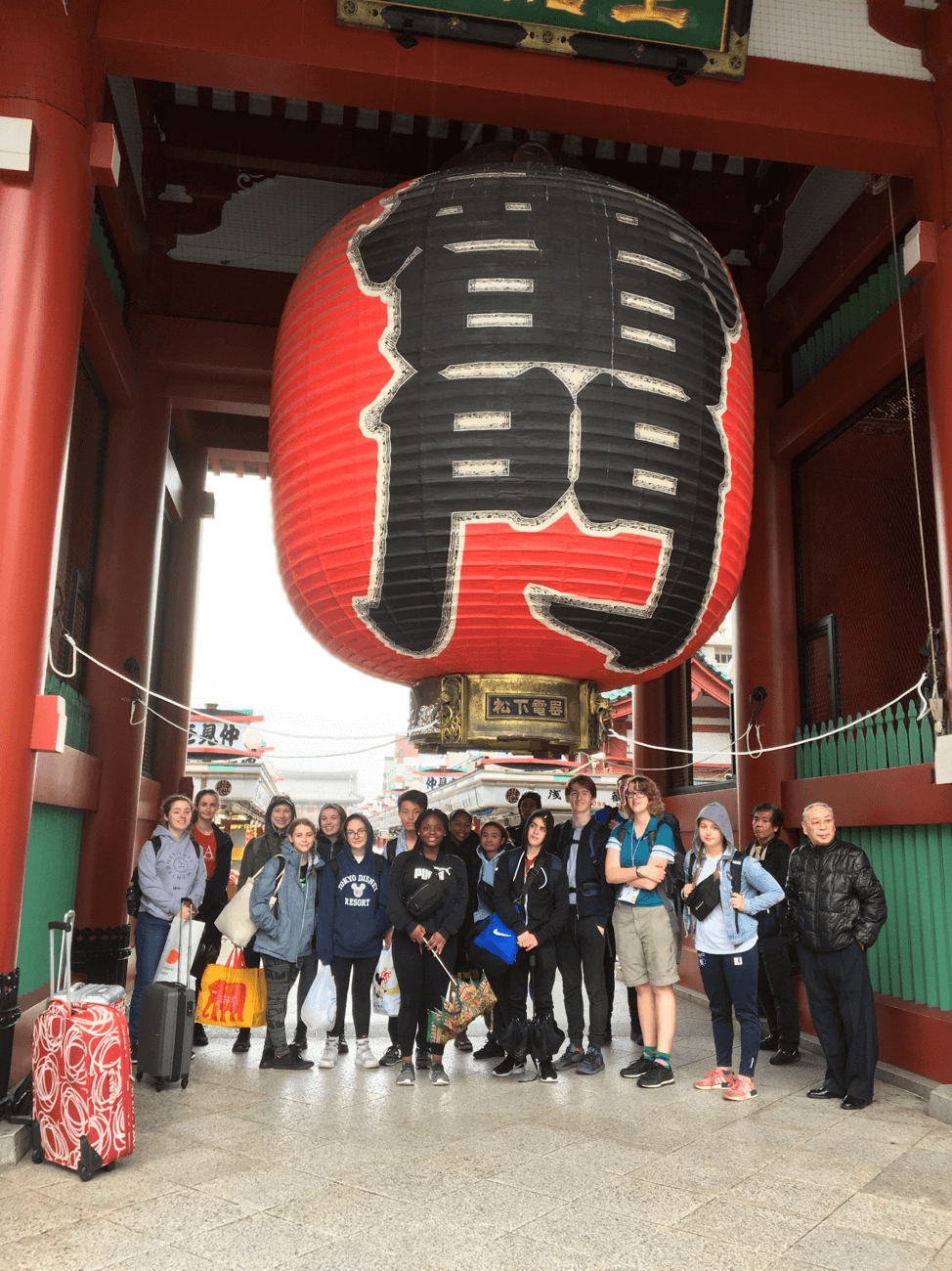 On 18th October 2019, 11 GCSE and 6 Ab Initio Japanese students travelled to Japan alongside Mrs Rajakumar and Ms Davids as part of a cultural exchange program. After a 13 hour flight with a brief stop off at Frankfurt, we arrived safely at Tokyo-Haneda airport.

The first part of the experience was to be spent as a group, exploring the traditions and lifestyle away from the metropolitan buzz of Tokyo. We stayed in traditional accommodation on the first evening, then moved to a monastery in Nagano. We slept on traditional Japanese futons and ate traditional breakfasts usually comprising rice, miso soup, fish and various fruits. Our time in Nagano and in the local area was spent visiting several exciting places: a ninja museum and escape house, a soba-making workshop and as part of a special event organised by a group of families in the Matsumoto region, an ancient village, a wasabi farm and a traditional castle. In the evenings, we took the time to either explore the town centre, participate in meditational activities and the anxiously anticipated communal bathing experience, which most of us eventually agreed was fine once we got used to it. We also had the privilege of visiting two primary schools, Komaki and Wakatsuki elementary schools, where we were readily welcomed and integrated into their classes, not to mention showered with compliments, questions and origami. At the end of our time at the monastery, we rose early to he blessed by the head monk at the famous Zenkouji temple and to pass through the “Tunnel of Life,” which was a bewildering yet culturally enriching experience to say the least.

We then travelled into Tokyo, which was practically worlds away from the relative serenity and tranquillity of Nagano. We arrived at Keio Chutobu, the secondary school our exchanges attend, and were reunited with our host partners. From this point onwards, our experiences were both unique and individual, as even during school hours we were seldom in the company of more than three other Hockerill students for long. We attended lessons with our partners, ate obento (Japanese packed lunch) with their friends and then accompanied them to their various club activities or met up with other groups to explore Tokyo. On the weekend, there was a combination of group trips and time spent alone with our host families, with many students going to one of the two Disneyland parks in Tokyo, as well as others visiting neighbouring regions and even renting a kimono for the afternoon. This truly gave us the opportunity to learn about and immerse ourselves in Japanese culture. Finally, the day before we left for the airport, we said goodbye to our exchanges and began the Tokyo Challenge, an urban orienteering activity created to encourage communication with Japanese pedestrians as well as seeing the sights of Tokyo, all with photographic and written evidence of course. Again, each student’s experience will have been unique to them, as not every group travelled to the same places. However, it can be safely said that the combination of the need to earn points, teamwork, navigating the Japanese train system and a 17:00 curfew, all whilst relying heavily on our own Japanese speaking abilities, proved for an interesting day out. The trip ended with a celebratory meal and a karaoke booth, a fitting way of saying goodbye to the strange yet wonderful country we had just experienced.

Now that we have returned from the journey, we often find ourselves reminiscing about places we saw or people we met during our brief time in Japan. It was a truly unforgettable experience, one that we were extremely fortunate to have and it will no doubt have enhanced our own Japanese skills, of not at the very least taught us of the differences between Japan and England. To everyone who helped to organise and execute the trip, ありがとうございました!

On Friday 19th October, a group of 14 students, accompanied by Mrs Rajakumar and Ms Davids, departed from Hockerill and set out on a trip to Japan – a trip which would prove to be one of new experiences, education and immersion into the Japanese society.

After arriving in Japan, we travelled across the country to Nagano, a smaller, more rural city than Tokyo, which is home to the famous Zenkoji Temple. We stayed in a Buddhist Monastery for four nights, and over the course of our days in Nagano, took part in various activities, such as travelling to the Togakushi Ninja Museum and shrine, and visiting the stunning Matsumoto Castle, one of the last of its type still remaining in Japan.

We also visited our partner primary schools – Komaki and Wakatsuki – for three days, interacting with all of the students and participating in traditional Japanese activities such as Japanese-style drumming, origami and dancing, in addition to just generally experiencing this completely different schooling system.

Following our final day at the primary schools, we then travelled back to Keio School in Tokyo to meet with our extremely welcoming exchange partners, who had visited us at Hockerill in March, and their families. We spent 2 full days at school with our partners, again experiencing this completely different system and culture, taking part in a whole range of classes at school – ranging from music to studies of Japanese society.

The weekend was then spent in our host families, who were all incredibly generous, showing us around different parts of Tokyo and helping us understand new aspects of Japanese culture and society. Not only was our time with our exchange families fun and exciting, but we all felt that it helped us improve and experiment with our Japanese language much more, and despite being difficult at time, was a very beneficial experience.

Finally, after saying goodbye to our host families, we spent our final day in Tokyo participating in the Tokyo Challenge – an urban-orienteering activity in which travelled around the city by train in small groups, visiting the different districts in Tokyo and spending time in a huge range of areas – from Buddhist temples such as the beautiful Sensouji Temple, to Harajuku, the fashion district of Tokyo.

Overall, The entire trip was a truly fantastic experience, during which we learnt to understand the Japanese way of thinking, visit many of the country’s wonders, and of course, improve our language skills drastically.

Where do our visitors come from?